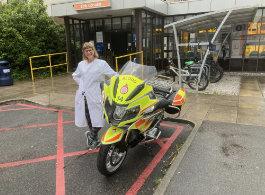 But it was 6thApril 2015 when a new era beckoned and Cornwall Blood Bikes was born at the relaunch day. The members that were still active from the CFW days into its launch were Alan Chowings, Rob Batten, Conrad Dowding, James Forder, Chris Polawski, Stephan Mellows, Dave Read, Paul Thomas, Ian Butler and Mark Holroyd.

As we prepared to mark this milestone early in April we had covered to that date 11,100 operational jobs 791, 258 operational miles.

We could not have done one bit of the story without the incredible, and outstanding support from the communities of Cornwall. We had planned for a public celebration as for the first time in the charities history we have been able to buy our first ever OWN charity purchased bike in the form of a BMW 1250 RT but COVID-19 pandemic had other ideas for us. We hope that the unveiling was the next best thing so that you could all share in the iconic moment.

It's been an incredible journey over that 5 years with many iconic moments, such as the Aviva Community Challenge, Masonic Charitable Foundation awards, and the Mark Mason benevolent Fund. In 2015 we had one fleet bike, our coordinating system was still on paper, and we fast forward to today with such effective systems in place which allow us to be professional in our approach to our free service.

We look back to over 650 fundraising events from the Tamar to Land’s End with all our funding coming from the generosity of the communities of Cornwall.

We have had the pleasure of attending cream teas, steam rallies, dog shows, local school fetes, scout/brownie groups, coffee mornings, knit and natter groups, quilting groups, just to name a new. It was a poignant moment to reflect and remember all those volunteers that have been part of the charity in years gone by, and for whatever reason are no longer a part of it but who have shaped who we have become. We are very fortunate to still have some founder stalwart members as part of the team and some outstanding new recruits as we face the future together.

So the bike was unveiled to reveal it's 5 year celebratory logo proudly bearing the names:

We were then joined by Elizabeth Carne the Grand Bard of Gorsedd Kernow by the wonders of technology to officially name our new bike. Tim Cookman then got himself kitted up, started the bike and rode off into the sunset onto operational duty (well more fog and Cornish mizzle really!)

May our "One and All" always have safe journeys and serve the public of Cornwall.

The biggest thank you is to each and every volunteer of Cornwall Blood Bikes for their time, commitment and dedication on our 5 year journey together.

Here’s to the next 5 years of working as one team, making special memories together, iconic moments, improving & developing our service, safe riding and to keeping our wheels turning.
Share 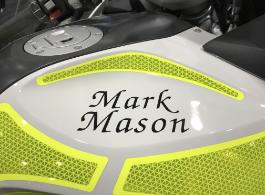 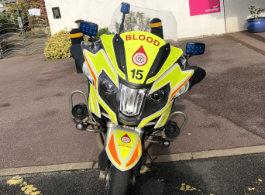 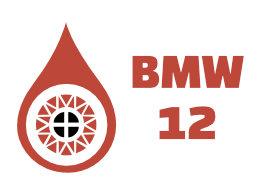